Paul Gauguin and his paintings 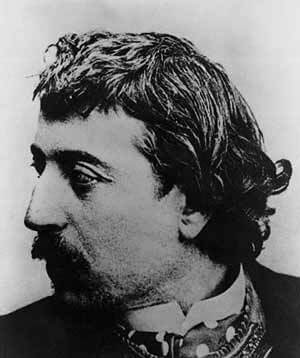 When the Paris stock exchange crashed in November 1882 a stockbroker by the name of Paul Gauguin (1848-1903) found himself without a living. From the prosperous middle classes he sank "deeper and deeper into the mud" of the proletariat, and was soon only able to offer his wife and five children "dry bread on credit." So he decided to make a career of his passion for painting, and in spring 1891 fled the old world on his own, for the South Sea island of Tahiti.

It was a flight to an exotic paradise, in Gauguin's imagination. But in the late nineteenth century, the unspoiled natural primitiveness Tahiti had once had survived only in areas that resembled reservations, under the rule of French and British colonialists. Gauguin settled in one of the native villages and painted to ward off the disappointment and resignation. The resulting pictures used glowing colors and resplendent surfaces that were less an account of a given reality than the projected dream of a European weary of civilization.

Although Paul Gauguin's controversial art career was relatively short, in just thirty years he created highly original masterpieces in a wide range of styles and mediums. Starting with his own unique version of Impressionist painting, he quickly moved on to a powerful, rather crude form of wood sculpture, to wildly unorthodox and fantastical ceramic objects, to Cloissonist painting, with its firm outlines, to Synthetist painting, with its broadly generalized forms, to Symbolist painting, with its mysterious contrasts.

Gauguin's His evolution reflects his rapacious intellect, which absorbed the stylistic principles of a wide variety of art traditions: folk art, caricature, medieval sculpture and stained glass, Japanese printmaking and decorative arts, Persian manuscripts and textiles, Far Eastern sculpture, and the so-called primitive arts of the South Seas. Yet he seldom lost sight of the full range of Old Master conventions, epitomized for him by such diverse models as Caravaggio, Rembrandt, Johannes Vermeer, Eugène Delacroix, and Ingres. His eclecticism was apparently motivated by the desire to create a timeless, universal art language that could express, in addition to the physical facts of the visible world, the invisible emotional verities of thought, dream, and superstition.

Despite this rich complexity, Gauguin's extraordinary life has always intrigued his admirers at least as much as his art, and sometimes more. Global in scope, his life was shaped by noble, if heartless and often unnecessary, gestures of self-righteous sacrifice and defiance for the sake of art. No less willing to hurt others than himself to fulfill his destiny as an artist, Gauguin abandoned a business career and a wife and five children, and he manipulated friends and colleagues relentlessly, as he sought freedom from mundane responsibilities that interfered with his single-minded passion. Boasting of what he described as his half-savage temperament, Gauguin sought attention and admiration by posing as a restless maverick, always ready to accept poverty and suffering as he turned heel to escape compromise, leaving Paris for Rouen, Rouen for Copenhagen, Copenhagen for Brittany, Brittany for Martinique, and so on, until death overtook him on the remote South Pacific island of Hivaoa in 1903.

Paul Gauguin dared to speak out for his artistic views rather than rely exclusively on journalists and historians, he actively promoted his own cause by writing throughout his career, thus contributing to a trend that has continued with our own century's self-styled artist-celebrities, such as Max Ernst, Marcel Duchamp, Salvador Dali, or Mark Rothko. In a letter to Maurice Denis in 1895, Gauguin congratulated his young disciple for writing art criticism:

It pleases me to see painters take care of their own interests... For some time, most of all since [I formulated] my project to bury myself in the islands of the Pacific, I have felt this obligation with which young painters are imposed, to write about art topics in a reasonable fashion."

Just like his friend, another Post-Impressionist artist Vincent van Gogh, Paul Gauguin was not well appreciated until after his death. Gauguin was later recognized for his experimental use of colors and synthetist style that were distinguishably different from Impressionism. His work was influential to the French avant-garde and many modern artists, such as Pablo Picasso, and Henri Matisse.

Gauguin's art became popular after his death and many of his paintings were in the possession of Russian collector Sergei Shchukin. He was an important figure in the Symbolist movement as a painter, sculptor, print-maker, ceramist, and writer. Gauguin's Symbolism was unique in that he sought escape from civilization in less industrialized, so-called primitive cultures rather than in the imaginary dream world of his predecessors. Gauguin's search for a lost paradise ultimately led him to the South Seas, where he filled his canvases, prints, and sculptures with highly personal and esoteric imagery that deliberately eludes a clear or finite interpretation. After Gauguin's death, in Central Europe, Symbolism witnessed a late flourishing in the works of the Vienna Secession and Gustav Klimt in particular, whose canvases display a deep fascination with both the productive and destructive forces of female sexuality.

Gauguin's bold experimentation with coloring led directly to the Synthetist style of modern art, while his expression of the inherent meaning of the subjects in his paintings, under the influence of the cloisonnist style, paved the way to Primitivism and the return to the pastoral. He was also an influential proponent of wood engraving and woodcuts as art forms.

Was I to have made this far journey, only to find the very thing which I had fled ? The dream which had brought me to Tahiti was brutally disappointed by the actuality. It was the Tahiti of former times which I loved. In view of the persistent physical beauty of the race, it seemed unbelievable that all its ancient grandeur, its personal and natural customs, its beliefs, and its legends had disappeared. But how was I, all by myself, to find the traces of this past if any such traces remained ? How was I to recognize them without any guidance? How to relight the fire the very ashes of which are scattered?"
- Paul Gauguin

The Day of the God

Why Are You Angry