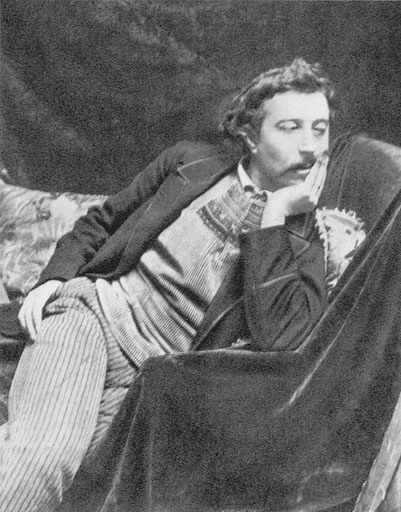 Paul Gauguin was born in Paris, France, to journalist Clovis Gauguin and Alina Maria Chazal, daughter of the proto-socialist leader Flora Tristan, a feminist precursor whose father was part of an influential Peruvian family. In 1850 the family left Paris for that country, motivated by the political climate of the period. Clovis died on the voyage, leaving eighteen-month-old Paul, his mother, and sister, to fend for themselves. They lived for four years in Lima with Paul's uncle and his family. The imagery of Peru would later influence Gauguin in his art. It was in Lima that Gauguin encountered his first art. His mother admired Pre-Columbian pottery, collecting Inca pots that some colonists dismissed as barbaric. One of Gauguin's few early memories of his mother was of her wearing the traditional costume of Lima, one eye peeping from behind her manteau, the mysterious one-eye veil that all women in Lima went out in. "Gauguin was always drawn to women with a 'traditional' look. This must have been the first of the colourful female costumes that were to haunt his imagination."

At the age of seven, Gauguin and his family returned to France, moving to Orleans to live with his grandfather. The Gauguins came originally from the area and were market gardeners and greengrocers: gauguin means 'walnut-grower'. His father had broken with family tradition to become a journalist in Paris. Gauguin soon learned French, though his first and preferred language remained Peruvian Spanish, and he excelled in his studies. After attending a couple of local schools he was sent to a Catholic boarding school in La Chapelle-Saint-Mesmin, which he hated. He spent three years at the school. At seventeen, Gauguin signed on as a pilot's assistant in the merchant marine to fulfill his required military service. Three years later, he joined the French navy in which he served for two years. He was somewhere in the Caribbean when he found out that his mother had died. In 1871, Gauguin returned to Paris where he secured a job as a stockbroker. His mother's very rich boyfriend, Gustave Arosa, got him a job at the Paris Bourse; Gauguin was twenty-three. He became a successful Parisian businessman and remained one for eleven years.

In 1873, he married a Danish woman, Mette-Sophie Gad (1850-1920). Over the next ten years, they had five children: Emile (1874-1955); Aline (1877-1897); Clovis (1879-1900); Jean Rene (1881-1961); and Paul Rollon (1883-1961). By 1884, Gauguin had moved with his family to Copenhagen, Denmark, where he pursued a business career as a tarpaulin salesman. It was not a success: He could not speak Danish, and the Danes did not want French tarpaulins. Mette became the chief breadwinner, giving French lessons to trainee diplomats. His middle-class family and marriage fell apart after 11 years when Gauguin was driven to paint full-time. He returned to Paris in 1885, after his wife and her family asked him to leave because he had renounced the values they shared. Paul Gauguin's last physical contact with them was in 1891. Like his friend Vincent van Gogh, with whom in 1888 he spent nine weeks painting in Arles, Paul Gauguin experienced many bouts of depression and at one time attempted suicide. He traveled to Martinique in search of an idyllic landscape and worked as a laborer on the Panama Canal construction; he was dismissed from his job after only two weeks.

In 1891, Gauguin sailed to French Polynesia to escape European civilization and "everything that is artificial and conventional". He wrote a book titled Noa Noa describing his experiences in Tahiti. There have been allegations by modern critics that the contents of the book were fantasized and plagiarized.

Gauguin left France again on 3 July 1895, never to return. His time away, particularly in Tahiti and Hiva Oa Island, was the subject of much interest both then and in modern times due to his alleged sexual exploits. He was known to have had trysts with several prepubescent native girls, some of whom appear as subjects of his paintings.

Gauguin outlived two of his children; his favorite daughter Aline died of pneumonia and his son Clovis died of a blood infection following a hip operation. Emile Gauguin worked as a construction engineer in the U.S. and is buried in Lemon Bay Historical Cemetery, in Florida. Jean Rene became a well-known sculptor and a staunch socialist. He died on 21 April 1961 in Copenhagen. Pola (Paul Rollon) became an artist and art critic and wrote a memoir, My Father, Paul Gauguin (1937).

Gauguin had several children by his mistresses: Germaine (born 1891) with Juliette Huais (1866-955); Emile Marae a Tai (born 1899) with Pau'ura; and a daughter (born 1902) with Mari-Rose. There is some speculation that the Belgian artist Germaine Chardon was Gauguin's daughter. Emile Marae a Tai, illiterate and raised in Tahiti, was brought to Chicago by French journalist Josette Giraud in 1963 and became an artist of note. 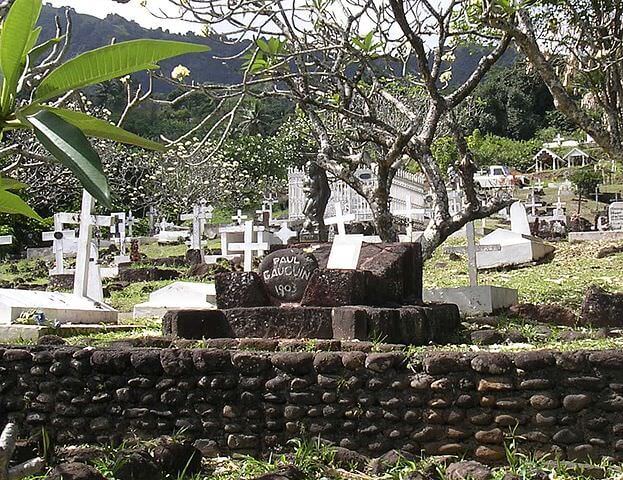 In French Polynesia, toward the end of his life, sick and suffering from an unhealed injury, he got into legal trouble for taking the natives' side against French colonialists. On 27 March 1903, while living in the Marquesas Islands, he was charged with libeling the governor, M Guicheray, and given three days to prepare his defense. He was fined 500 francs and sentenced to three months in prison. On 2 April, he appealed for a new trial in Papeete. At the second trial, Gauguin was fined 500 francs and sentenced to one month in prison. At that time he was being supported by the art dealer Ambroise Vollard. Suffering from syphilis, he died at 11 a.m. on 8 May 1903 of an overdose of morphine and possibly heart attack before he could start the prison sentence. His body had been weakened by alcohol and a dissipated life. He was 54 years old.

Gauguin was buried in Calvary Cemetery (Cimetiere Calvaire), Atuona, Hiva Oa at 2 p.m. the next day.

The Day of the God

Why Are You Angry